I can describe my favorite thing about fall in two simple words… Apple. Season.  If you find yourself with an abundance of delicious fall apples, you need to make these Apple Cinnamon Rolls! Not only are they super easy to whip up, but they’re delicious!

This post is sponsored by GreenPan. All opinions are 100% my own. Thanks for continuing to support the brands that help make ‘Mike Bakes NYC’ possible!

How to Sauté Apples

Let’s walk through how to make the sautéed apples portion of the filling! They’re super easy but I like to make sure you know exactly how it’s done to ensure your culinary success!

Start by placing the peeled and diced apples into a nonstick fry pan along with the sugar and spices. Stir to make sure the apples are evenly coated and then cook on medium-high until the apples start to release their juices. Once that happens, add the cornstarch and cook until all the ingredients caramelize onto the apples and they brown slightly. It'll take maybe 5-6 minutes! Then you can let the apples cool down in the pan until you're ready to add them on top of the cinnamon roll filling.

If you’re looking to invest in a great nonstick pan, I highly recommend GreenPan. It won’t break the bank, it's high quality, and it's oven safe up to 600°F (315°C) which means you can bake in it. I mean... what’s not to love? I’ve used the 12-inch nonstick ceramic skillet pictured below for this recipe every single time; both to sauté the apples and bake the cinnamon rolls in and I'm always amazed at how easy cleanup is due to the nonstick surface!

I hope you enjoy every single, apple-filled bite of these cinnamon rolls! Enjoy!!

Looking for other Cinnamon Rolls Recipes? Check these out! 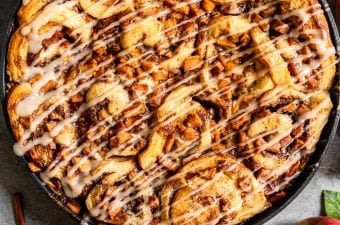 For the Sautéed Apple Filling:

For the Cinnamon Sugar Filling:

For the Chai Cream Cheese Glaze: