Whenever I need to make a special breakfast, I always turn to this homemade cinnamon roll recipe.

This particular cinnamon roll recipe is a step above the rest. With a few special (but not difficult) touches (which we’ll discuss below), and an easy-to-follow method, you can make the best cinnamon rolls EVER, in the comfort of your own home!

How Do You Make Homemade Cardamom Cinnamon Rolls?

To help ensure your success in making these Cardamom Cinnamon Rolls, we are going to walk through the significant steps in the process together! Starting with making the cinnamon roll dough.

This is my go-to brioche dough for just about everything. I mean… the dough is full of little vanilla bean specks and is also incredibly soft and easy to work with. Basically… it’s perfect.

Start by adding the milk, yeast, eggs, butter, flour, salt, and sugar to a large bowl and stir until just combined. After you let the mixture rest for 5 minutes to hydrate the flour, add the seeds of the scraped vanilla bean and knead the dough until a firm, but slightly tacky ball is formed. You should really only need 4 cups of flour; resist the temptation of adding too much!

Once the dough is kneaded and smooth, turn it out onto a well-floured surface and knead by hand, only adding more flour when it begins to stick. It should be smooth and elastic, but still a little tacky; then, place it in a lightly greased bowl to rise for about 30-45 minutes.

While the vanilla bean brioche dough is rising, make the cardamom cinnamon sugar filling. The cardamom in the filling adds a nice warmness and contrasting flavor to the cinnamon, so I encourage you to try it! You can leave it out and just use two tablespoons of cinnamon instead to make the best cinnamon rolls ever.

THERE ARE TWO WAYS TO MAKE THE CARDAMOM CINNAMON SUGAR FILLING:

The second method is easier, however, I prefer the first method because I find the filling doesn’t leak out of the cinnamon rolls to the bottom of the pan as much.

Honestly, this icing should come with a warning that’s how good it is. While the cardamom cinnamon rolls are baking, start browning your butter. Once browned and nutty-smelling, add to your softened cream cheese and stir to combine. Don’t worry if the mixture looks a little curdled, it will smooth out! Add the powdered sugar, vanilla bean paste, and milk and stir until smooth and combined. Then, you’re ready to drown your rolls once they’re out of the oven!

How to Make Cardamom Cinnamon Rolls Ahead of Time:

There are many ways to do this, here are my suggestions below. No matter which method you choose, always tightly cover the rolls so no air can get to the dough and dry it out.

2) REFRIGERATE ASSEMBLED CINNAMON ROLLS TO BAKE THE NEXT DAY

3) FREEZE CINNAMON ROLLS TO BAKE AT A LATER DATE.

For the Cardamom Cinnamon Sugar Filling: 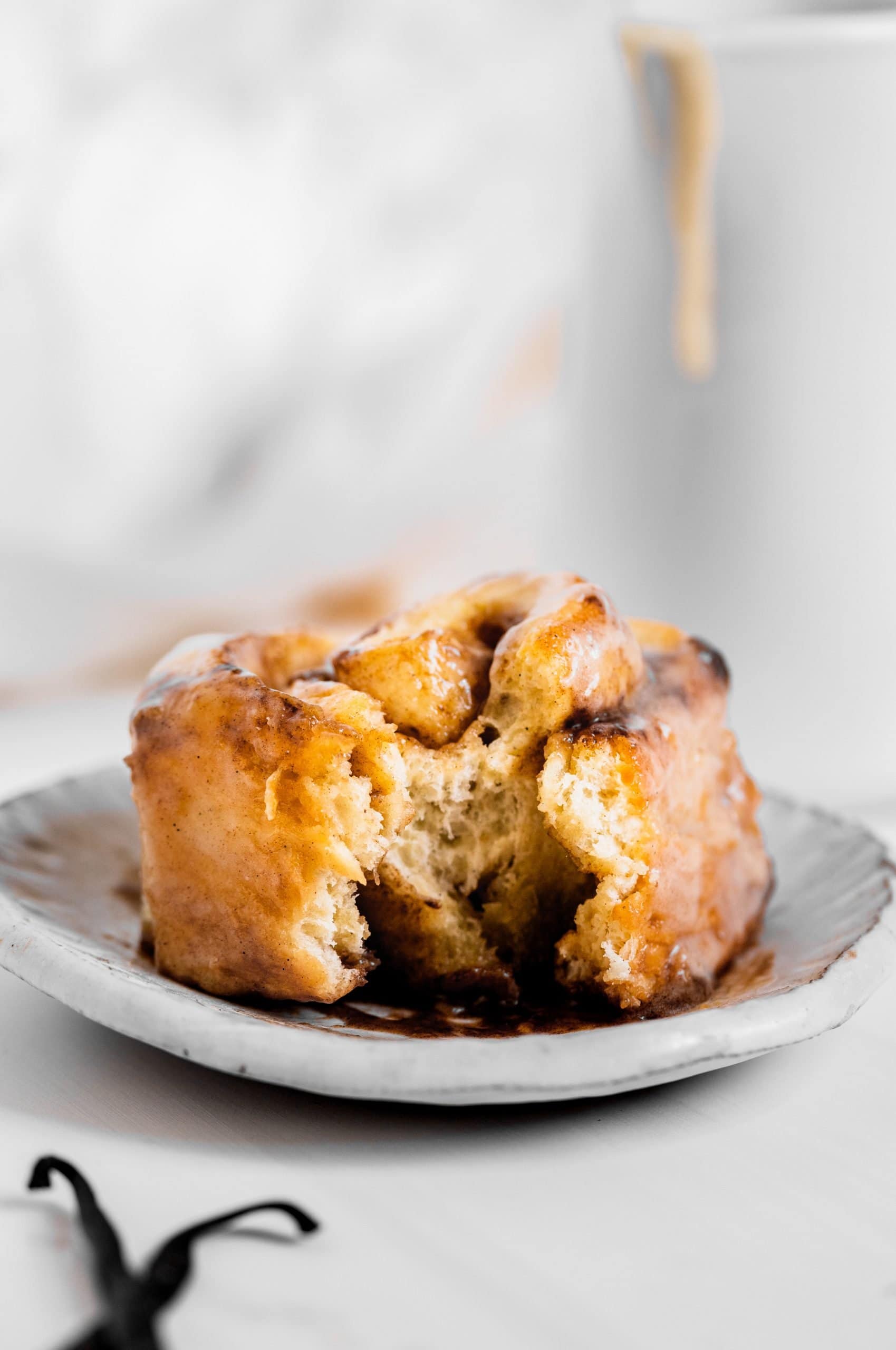