There are few things as indulgently delicious as a cinnamon roll. A giant swirl of dough filled with cinnamon sugar, baked until golden brown then smothered in cream cheese icing? Uh, yes, please!

These Chai Spiced Cinnamon Rolls give you the flavor and aroma of a warm and inviting cup of chai amidst every sticky bite of the fluffiest and softest cinnamon rolls you can imagine.

The vanilla bean brioche dough is my go-to dough for cinnamon rolls. To give these Chai Spiced Cinnamon Rolls their flavor though, I added chai spices to the original cinnamon filling. We’re talking about adding ginger, cardamom, allspice, and a touch of black pepper. These spices add depth and warmth to the classic filling, trust me! The chai filling as written in the recipe yields 1 tablespoon, but you can easily make a larger batch and use it in other baked goods! I'm obsessed with it; it's even featured in one or two cookbook recipes of mine. 😉

LOOKING FOR MORE CINNAMON ROLL RECIPES?
CHECK THESE OUT! 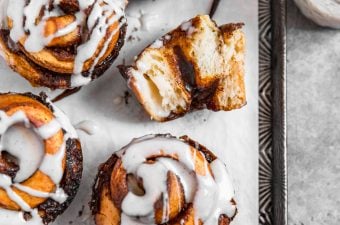 For the Chai Spiced Filling: