These Vanilla Chai Baked Donuts feature a vanilla cake donut tossed in chai-spiced sugar. They come together quickly and are sure to become your new favorite holiday treat!

This post is sponsored by Domino® Sugar. All opinions are 100% my own. Thanks for continuing to support the brands that help make ‘Mike Bakes NYC’ possible!

Sooooo, I’m in a lot of trouble. Ever since I made these vanilla chai baked donuts, I’ve been craving them every single morning. Somehow, they seem just a little more interesting than my typical cereal/granola bar ordeal. SOMEHOW.

These vanilla chai baked donuts are made with Domino® Golden Sugar. It’s made from pure cane sugar, is less processed than white sugar, and yet works cup-for-cup just like white sugar. It also imparts just a hint of molasses flavor and has the perfect golden color. You can grab Domino® Golden Sugar on Amazon here! Or you can find it in your local grocery store! (Here’s a nifty little store locator tool!)

What Do I Need to Make Baked Donuts

First things first, to make baked donuts, you’re going to need a donut pan. Luckily, they’re really inexpensive! You can get a set of 2 non-stick, six cavity donut pans on Amazon for less than $20.

Once you have your materials, get your ingredients out, and you’re ready to get started. And to be honest, making these vanilla chai baked donuts is really similar to making muffins. Mix the dry ingredients in one bowl and the wet ingredients in another, then mix them together. (It’s really that easy.)

There are two main components to these delicious vanilla chai baked donuts.

The vanilla cake donut batter is whisked together by hand in minutes. That’s right, no mixer required. You’ll mix the milk, melted butter, Domino® Golden Sugar, egg, sour cream, and vanilla bean paste in one bowl and the flour, baking powder, baking soda, cinnamon, and salt in another bowl. Then you’ll pour the wet ingredients into the dry and mix until just incorporated.

The bake time is also super quick: only about 10 minutes tops. Once the donuts are out of the oven, let them cool for 2 minutes, invert the pan to release the donuts, then re-grease the donut pan and bake the remaining donut batter.

Once these beautiful little donuts are baked and cool to the touch, they get a little coating of melted butter for some extra flavor, then dunked and tossed in the chai sugar. DELICIOUS. 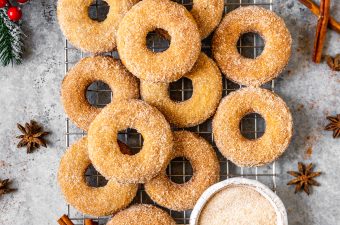 For the Baked Vanilla Donuts:

For the Chai Sugar Topping: