It’s officially October and there’s a hint of fall weather in the air. The stores are lined with tons of fresh apples and apple cider is like everywhere now. This is by far my favorite time of year because I love creating fall desserts, especially anything with apples or apple cider in it... which is why creating these baked apple cider donuts were a no-brainer.

You know how there are some recipes that are just so delicious and so so crave-worthy? Well, these donuts are just that. They’re full of fall flavors, slightly crisp on the outside, soft on the inside, perfectly sweet, and truly mouth-wateringly good. They’re best enjoyed on a crisp fall morning, or afternoon, with a warm mug of coffee, tea, or hot cocoa.

What Do I Need To Make Baked Apple Cider Donuts?

First things first, to make baked donuts you’re going to need a donut pan. Luckily, they’re really inexpensive! You can get a set of 2 non-stick, six cavity Wilton donut pans on Amazon for less than $15.

Once you have your materials, get your ingredients out and you’re ready to get started. And, to be honest, making baked apple cider donuts is really similar to making muffins. Mix the dry ingredients in one bowl and the wet ingredients in another and then mix them together. (It’s really that easy.)

The first step to making these baked apple cider donuts is to reduce some apple cider in a saucepan. You might be annoyed with me for requiring the extra step of boiling the cider before it goes into the donut batter.  I was annoyed myself, honestly, but enough recipes I looked at while researching indicated it was necessary... so I gave in.  Trust me when I say it’s worth it. The flavor concentrates and it’ll make your home smell like fall heaven.

Once your cider is reduced, you'll add butter to it until melted; the result with be syrupy in texture. Then you'll whisk together 1/2 cup of the cider/butter mixture with an egg, sugar, sour cream, and vanilla until combined. In a separate bowl, you'll whisk the flour, baking powder, baking soda, cinnamon, nutmeg, cloves, and salt then add to the wet ingredients and mix until incorporated.

Once these beautiful little donuts are baked (and it happens quickly), they get a little bath in the reduced cider/melted butter mixture for some extra flavor, then dunked in apple pie spiced cinnamon sugar. DELICIOUS.

I hope you enjoy these as much as I have! 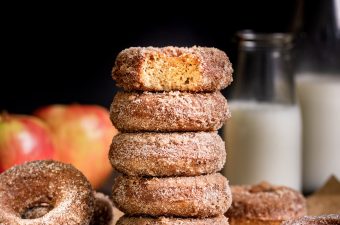 For the Baked Apple Cider Donuts:

For the Cinnamon Sugar Topping: