×
Home » Brownies » S'mores Brownies
S'mores Brownies have it all- your favorite homemade brownie over a graham cracker base with toasty, golden marshmallow meringue on top.
Jump to Recipe Leave a Comment

This post may contain affiliate links. Read my Disclosure page.

S’mores Brownies are a fun twist on the classic brownie recipe. Graham crackers topped with fudgy homemade brownies and a toasted marshmallow meringue topping... what's not to love?!

I made these S'mores Brownies with Domino® Golden Sugar. It’s made from pure cane sugar, is less processed than white sugar, and yet works cup-for-cup just like white sugar. It also imparts just a hint of molasses flavor and has the perfect golden color. You can grab Domino® Golden Sugar on Amazon here! Or you can find it in your local grocery store! (Here’s a nifty little store locator tool!)

How to Make S'mores Brownies

These S'mores Brownies are extremely simple to make and the results are unreal. Trust me! There are two essential components for this recipe: the brownie layer and the marshmallow meringue topping!

The brownie layer contains your standard brownie ingredients; you know... butter, flour, eggs etc. This particular brownie recipe uses only cocoa powder which makes for a deliciously chewy brownie that comes together quickly.

Next, you'll mix your brownie batter, then pour and carefully spread the batter onto the graham crackers and bake at 350°F (180°C) for 30-35 minutes, or until a toothpick comes out with moist crumbs. Then you'll let the brownies cool completely while you make the Marshmallow Meringue.

Don’t be scared or disgusted by the word “meringue”. It's really easy to make and it makes for a gorgeous topping on these brownies. Marshmallow meringue is everything you love about marshmallows, but in semi-liquified form; think of it as homemade marshmallow fluff. It’s extra creamy, soft, and sweet and pairs wonderfully with a variety of flavors, especially these S'mores Brownies. When toasted, it tastes just like a marshmallow roasted over a campfire!

Ingredients for the Marshmallow Meringue:

How To Make Marshmallow Meringue

If you've ever made a Swiss meringue before, this process will be very familiar to you. You'll start by heating the egg whites and the Domino® Golden Sugar in a double boiler. This step serves two purposes:

Once the egg whites and sugar are combined and reach 160°F (70°C) on an instant-read thermometer, it’s time to let your stand mixer do all of the work. You'll add the vanilla bean paste and whip the mixture on high for 4 to 5 minutes, and before you know it... you'll have a glorious, marshmallow meringue. Try not to eat it all before topping the brownies! ?

Can I double this S'mores Brownies recipe?

Yes! You can easily double the recipe, and bake in a 9×13″ pan. You can adjust the ‘servings’ slider from 16 to 32 in the recipe card to get the proper measurements.

Is the Marshmallow Meringue stable?

Because of the addition of cream of tartar, the topping is relatively stable. It can definitely be piped, and it holds its shape relatively well.

However, you may notice that it might lose a little of its volume over time; especially if you choose not to torch it.

Help! My brownies came out dry. What did I do wrong?

If you used cup measures as opposed to weight measures, your ingredients were probably a little off. As weird as this sounds, measuring cups aren’t as accurate as you think. For example, somebody who scoops the measuring cup into the flour will have way more than somebody who uses a spoon to scoop the flour into the same sized measuring cup. This is why you should really be measuring by weight with a kitchen scale instead—it’s much more reliable and completely eliminates any inconsistencies.

Alternatively, if you measured your ingredients by weight and the brownie still came out too dry, you might have overmixed your brownie batter or overbaked the brownies. Overmixing the batter will allow air to get trapped in the batter and will result in dry, cakey brownies. Overbaking is pretty self-explanatory; make sure you remove the brownies when a toothpick inserted into the center comes out with moist crumbs sticking to it. If it comes out clean, you've overbaked them!

Help! My Marshmallow Meringue is runny? What did I do wrong?

Nine times out of ten, if you’re having trouble getting your meringue to whip up properly, it’s because a trace of fat somehow made its way into your bowl. Egg whites WILL NOT whip up right if there is any grease or fat present, no matter how microscopic it might be.

So make sure your bowl and whisk are REALLY clean, with no trace of greasiness whatsoever. It’s best to clean them in very hot, soapy water and rinse them well, then dry them with a clean towel. I also like to wipe my bowl down with lemon juice to ensure there's no traces of grease or fat whatsoever!

Looking for more brownie recipes?
Check these out!

This post is sponsored by Domino Sugar. All opinions are 100% my own. Thanks for continuing to support the brands that help make ‘Mike Bakes NYC’ possible! 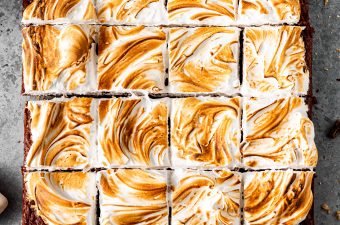 For the Marshmallow Meringue Topping:

To Make the Brownies:

To Make the Marshmallow Meringue Topping:

The brownies, once topped with the marshmallow meringue, can be left at room temperature for up to 6-8 hours. Cover and store leftovers for up to 2 days in the refrigerator.