I wasn't going to post this recipe, to be honest. I mean... the internet is flooded with these classic marshmallow squares, but I figured you might like to know how I’ve been making them over the years…? Maybe? Hopefully?

I love making Rice Krispie Treats from scratch (so much so that I have a recipe for my fav kind in my first cookbook, Even Better Brownies) but I don’t make them often enough. Probably because I’d eat the entire pan in one sitting. The solution? Making a small batch in a loaf pan.

And since we're all still quarantining and social distancing, now is the perfect time to post my recipe for Small Batch Rice Krispie Treats.

You only need 5 simple ingredients for these delicious no-bake treats.

HELP! MY RICE KRISPIE TREATS ARE HARD INSTEAD OF SOFT AND CHEWY. WHAT DID I DO WRONG?
I get it, you want to get these quick-to-make squares set as soon as possible so you can dig in. It’s tempting to turn up the heat to speed up melting the butter and marshmallows but resist the urge. High heat is the prime culprit for rock-hard rice krispie treats.
It will take a few more minutes of cook time, but melt the butter and marshmallows over low heat, smashing the marshmallows with the back of your spoon or spatula to allow the residual heat to melt them all. You’ll be rewarded with delicious, soft and chewy treats!

HELP! MY MARSHMALLOWS MELTED INTO A WEIRD GUMMY BLOB. WHAT DID I DO WRONG?
If this happened, your marshmallows were just a bit too old! After marshmallows have been sitting around for a while, they start to dry out and the exterior gets firm. Most importantly, they don’t melt nearly as well. Instead of becoming soft and gooey, they melt into one giant blob.
Save the older marshmallows for hot cocoa and s’mores, and pick up a fresh bag of marshmallows to ensure a really great batch of rice krispie treats.

HELP! MY RICE KRISPIE TREATS SEEM REALLY STICKY. WHAT DID I DO WRONG?
I've found out through recipe testing that some brands of marshmallows produce very sticky rice crispy treats. If, as you are mixing your cereal treats, you find that they are just too sticky, add a bit more cereal, a small amount at a time, until the treats no longer feel overly sticky.

CAN I MAKE THESE WITH REGULAR MARSHMALLOWS INSTEAD OF MINI MARSHMALLOWS?
Totally! Mini marshmallows just melt down much easier than their larger counterparts. If using large marshmallows, you'll still need 5oz total which is approximately 20 marshmallows (depending on the brand). Use a scale to be sure!

CAN I DOUBLE THIS RECIPE?
Absolutely! You can easily double the recipe and press into an 8x8-inch pan. You can adjust the ‘servings’ slider from 8 to 16 in the recipe card to get the proper measurements. 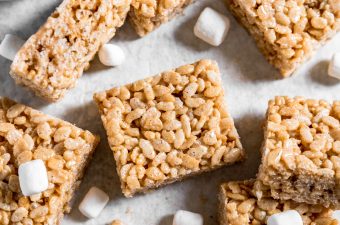 The treats can be stored in an airtight container at room temperature for up to 5 days.