Easy, no yeast cinnamon rolls that are loaded with brown butter & maple syrup, filled with cinnamon sugar & pecans, and then topped with a brown butter maple icing.

I love cinnamon rolls. All that gooey, cinnamon-sugar in the middle and that icing smeared all over the top… but I don’t always love dealing with rising times and the looooong process that making cinnamon rolls can require. That's why I'm happy to report that these cinnamon rolls are made without yeast, which means they can be made (and consumed!) in less than an hour... and they are so so SO good!

What sets these homemade no yeast cinnamon rolls apart from the rest is that they're maple-flavored and loaded with brown butter, which makes them an instant favorite if you have taste buds. Pure maple syrup and brown butter is worked both into the dough AND the sweet glaze on top. Helllllo HEAVEN.

Can I use regular milk instead of buttermilk?
Technically, yes... but I wouldn't recommend it. Using regular milk will yield rolls that are less tender/soft. If you decide to use milk, add something acidic to it (like lemon juice or vinegar) so the baking soda has something to react with in the dough.

Will the cinnamon rolls still rise without yeast?
Yes, as they are baking, the baking powder & baking soda causes the cinnamon rolls to rise some. They aren’t going to double in size or anything, but you will be left with a fluffy and delightful cinnamon roll without all the fuss of using yeast!

Help! My cinnamon rolls came out dense and tough! What did I do wrong?
It sounds like you added too much flour to your dough! This dough is pretty sticky when you're working with it, so resist the urge to add too much flour. Simply dust your hands repeatedly with flour as you work with the dough. 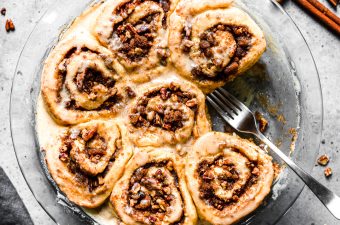 For the Brown Butter:

For the No Yeast Brown Butter Dough:

For the Brown Butter Maple Icing:

To Make the Brown Butter:

To Make the No Yeast Brown Butter Dough:

To Make the Brown Butter Cinnamon Sugar Filling and Assemble: