Extreme fudge alert! These ultimate fudge brownies are rich, delicious, and dense! They’re better than your store-bought brownies mixes (you know the ones). What’s my secret? This recipe uses both dark chocolate and cocoa powder. It’s the ultimate chocolate lovers brownie made from scratch!

If you google “ultimate fudge brownies” there are millions of search results... (I don’t recommend doing this if you’re hungry.) I’ve thrown quite a few made-from-scratch brownie and bar recipes out there myself, and I've even written an entire brownie cookbook. So you can trust me when I say I know a thing or two about brownies and I guarantee that this ultimate fudge brownie recipe provides that box mix fudginess that we all know and love.

I don’t like throwing around ‘best’ and ‘ultimate’ all the time since I know brownie recipes can be subjective, of course. I don’t want to step on your Great Grandma Edna’s recipe or your favorite boxed mix, but for me, this is my new favorite.

You probably have most of what you need to make these chocolate fudge brownies already sitting in your kitchen. Here's what you'll need:

Note: If you don't have Dutch-processed cocoa powder, you can substitute it with an equal amount of unsweetened natural cocoa powder!

How to Make the Best Brownies from Scratch

These are rather simple to make but they do require a little extra work compared to your basic one-bowl brownie recipe. I promise it's worth it though! You'll need a saucepan, a hand or stand mixer, and three mixing bowls. To make them, you'll follow these steps:

Can I double this ultimate fudge brownie recipe?
Yes! You can easily double the recipe, and bake it in a 13×9-inch pan. You can adjust the 'servings' slider from 16 to 32 in the recipe card to get the proper measurements. Just keep in mind that your brownies might take a few minutes longer to bake overall.

Do I really need a mixer to make these ultimate fudge brownies?
Unfortunately, yes! Whisking the ingredients by hand just won't incorporate as much air into the batter, which is essentially our leavening agent. The recipe also instructs you to add melted chocolate and butter to eggs while the mixture is still warm. Using a hand or stand mixer helps prevent the eggs in the batter from scrambling because the whisking motion distributes heat more evenly!

Can I reduce the sugar in these brownies?
I don't recommend it, but you can reduce the granulated sugar by 1/4 cup (50 grams), and should be fine! I wouldn't mess with the dark brown sugar at all since the moisture (from the molasses in the brown sugar) helps contribute to the brownies' chewiness and fudginess.

How can you tell when the brownies are done baking?
A toothpick is your best friend when testing brownies for doneness. You'll want to remove these brownies when your toothpick is covered in moist crumbs; they might even still look ever so slightly underdone in the center. The residual heat of the pan will continue to finish cooking them to fudgy perfection, however, so make sure to let them cool completely in the pan.

Can I top these with frosting for fudge brownies?
You could... but they really don't need it. These brownies are so rich and indulgent that they don't really need frosting on top! You'll enjoy them just as is, I promise!

What can I substitute the eggs with?
I haven't tested this recipe using any sort of egg substitute nor do I plan to, unfortunately. The eggs are such a key component in this recipe and contribute to the overall thickness, texture, and fudginess of the brownies; I'm skeptical that any sort of substitute would work without significantly changing the final result.

What pan should I bake these fudgy brownies in?
This brownie recipe calls for an 8x8-inch metal pan! It is possible to bake brownies in a glass pan, but I don't recommend it for this recipe. Glass bakeware is slower to heat than metal, and once it's hot... it retains that heat for much longer. So when using a glass pan to bake something like a batch of brownies, you may find that the sides and bottom brown at a much faster rate than the interior cooks... which is not ideal!

How do I cut these brownies neatly/cleanly?
I like to use a chef's knife because the long blade can slice across the length of the pan in one cut. There are two different methods I recommend. You can either
1) Lightly spray the blade with cooking spray on both sides before making your first cut. After making the cut, wipe the blade clean with a warm, damp paper towel, and then repeat the spraying, cutting, and wiping.
OR
2) Keep the knife in a tall container of very hot water and dip/wipe it between each cut to rewarm the knife and remove the crumbs.

What's the best way to store these homemade fudge brownies?
These brownies should be stored in an airtight container at room temperature; they'll last for up to 4 days. If you plan on storing for longer than 3 days, I recommend adding a piece of sliced bread to the storage container. The moisture from the bread will help keep the brownies soft and fresh longer.

Can I freeze leftover fudge brownies?
You can absolutely freeze these brownies! To do so, individually wrap any leftover brownies in two layers of plastic wrap, then a layer of aluminum foil. (The aluminum foil will prevent the bars from absorbing any other flavors or odors in the freezer.) Freeze for up to 3 months. Transfer the brownies to the refrigerator to thaw overnight before serving. You can eat the brownies straight from the fridge, or rewarmed in the microwave.

Help! My brownies don't have the shiny paper crinkle top like yours do! What did I do wrong?
It’s likely one of three things! You either 1) used too much flour, 2) used too little sugar, or 3) baked the brownies for too long. If you used cup measures as opposed to weight measures, your ingredients were probably a little off. As weird as this sounds, measuring cups aren’t as accurate as you think and it's easier to use too much or too little of an ingredient when using volume measures. This is why I list ingredients by grams first and why you should really be measuring by weight with a kitchen scale instead—it’s much more reliable and completely eliminates any inconsistencies.

If you used weight measures and are STILL experiencing issues, it’s likely that the brownies were overbaked. Check out the notes below on how to test brownies for doneness.

Help! My brownies came out a little cakey and tough. What did I do wrong?
Cakey, tough brownies are caused by overmixing the batter! When mixing the dry ingredients into the rest of the batter, simply mix just until the flour disappears! If you mix beyond that, your brownies will come out tough and no one wants that...

If you like your brownie recipe to be fudgy and super chocolatey, well then, these ultimate fudge brownies were made for you. Give 'em a try and let me know what you think! If you're afraid you'll eat the entire pan in one sitting, then I suggest making these small batch dark chocolate fudge brownies instead! 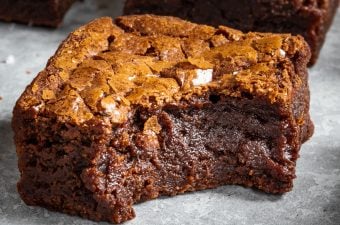 *It’s better to pull the brownies out of the oven early than leave them in too long—if you overbake the brownies, they’ll be dry & tough.