These Chocolate Pudding Doughnuts are fluffy brioche doughnuts that are rolled in sugar, then filled with a silky smooth chocolate pudding. These are the ultimate stuffed doughnut!

Today I’m sharing these delicious Chocolate Pudding Doughnuts that my friend Erin and I did as a part of a collab last year for Thanksgiving Doughnuts!

A simple homemade doughnut, filled with a luscious homemade chocolate pudding. They’re so easy and truly better than anything you could buy. Every bite is creamy, sweet, and oh so delicious! The doughnut itself is soft, fluffy, and perfectly sweet with vanilla notes hinted throughout.

Oh, and that chocolate pudding… It’s extra chocolatey, creamy, and so much easier to make than you might think! When put together, the two make for an unforgettable treat that everyone will be asking for more of. When you’re in need of a delicious chocolate-filled doughnut, this is definitely the recipe you need! Perfect for a truly special breakfast or a sweet dessert.

We’re using a pretty straightforward brioche dough for today’s doughnuts and you only need a few ingredients to begin. Here’s what you’ll need:

How to Make Chocolate Pudding Doughnuts

Start by adding the milk, yeast, eggs, flour, salt, vanilla bean paste, and sugar to a large bowl and stir until just combined. Then you’ll knead the dough until a firm, but slightly tacky ball is formed; resist the temptation of adding too much flour! Once the dough has formed, you’ll slowly add the softened butter in a little at a time, allowing each bit to incorporate before you add the next. Once all the butter is incorporated, you’ll knead for another 10 minutes or so.

Once the dough is kneaded and smooth, place it in a lightly greased bowl to rise for about 60-90 minutes. Note: Instead of using warm milk to mix the dough, use room temperature milk and refrigerate the dough immediately after mixing. Under refrigeration, the dough continues to rise, just much more slowly. This means you can mix the dough up to 12 hours ahead, let it rise slowly overnight, and wake up ready to fry in the morning.

To shape the dough, there are two different routes you can take! You can either 1) divide the dough into portions (we did 75g per doughnut), shape them into balls, and press them slightly to flatten OR 2) roll the dough out until about ½-inch thick and cut out the circles using a biscuit cutter. Once they’re shaped, leave them to proof and make your chocolate pudding!

The process of making pudding — any pudding — is easy. Pudding is simply milk and cream, sweetened and thickened by a brief bout of cooking on the stovetop or in the oven. Unbaked puddings, like this chocolate one, get their richness and thickness from a mixture of cornstarch and egg yolks.

To make the pudding, you’ll start by heating the milk, heavy cream, and chopped chocolate over medium-low heat, stirring constantly, until the chocolate has fully melted. Then you’ll bring the mixture to a gentle simmer.

While that’s happening, you’ll whisk together sugar, cornstarch, espresso powder, and the egg yolks together until well combined. Once the chocolate mixture has come to a simmer, slowly pour about half of it into the egg yolk mixture in a steady stream while whisking constantly. Then pour the egg yolk/chocolate mixture into the saucepan and continue cooking the pudding over low heat, stirring constantly until it gets very thick and comes to a first boil (a single large bubble comes up to the surface in the center of the pudding), about 3 to 4 minutes. Once that happens, you’ll stir in the butter and vanilla and then ta-da! You’re done! Transfer the chocolate pudding to an airtight container and press plastic wrap directly onto the surface of the pudding to prevent a weird film/skin from forming while you chill it down.

Can I halve this recipe?
Yes! You can easily halve the recipe and make these small batch. You can adjust the ‘servings’ slider from 14 to 7 in the recipe card to get the proper measurements. Just keep the amount of yeast the same.

Can I bake these doughnuts instead of frying them?
Unfortunately, no. This recipe was developed to be fried and if you attempt to bake them, you’ll end up with something closer to a hamburger bun than a doughnut. I have some baked donut recipes here though!

Help! My doughnuts are oily! What did I do wrong?
It sounds like your oil wasn’t hot enough! Many fearful fryers set the oil temperature too low thinking that it will make frying more forgiving. Frying at too low a temperature, however, will result in greasy doughnuts with a tough crust. Next time, watch the oil’s temperature carefully as you fry and adjust the heat as needed to maintain a temperature between 350°F (175°C) and 360°F (180°C). It’s better to add doughnuts to slightly warmer-than-desired oil, as the dough will bring the oil temperature down a few degrees, than too-cool oil.

If your oil temperature was fine, then it’s possible you didn’t properly drain the doughnuts. Drain the doughnuts over the pot of oil for at least 10 seconds (a gentle shake will force oil off the doughnut). Move the fried doughnuts to a paper towel-lined sheet pan, where the towels will wick away leftover oil. And then finally move the drained doughnuts to a cooling rack so that they aren’t sitting in a pool of their own oil before filling them.

Help! My doughnuts are dense! What did I do wrong?
Dense doughnuts that don’t puff up much when fried are the result of under-proofing. To check if your doughnuts are ready to be fried, lightly poke/prod the first doughnut you cut/rolled. If the indentation immediately bounces back and disappears, the dough isn’t ready yet. If it stays, however, it’s ready to be fried!

Help! My doughnuts are raw in the middle! What did I do wrong?
Doughnuts that are raw in the middle can be caused by two things. The most common reason is from frying them in oil that is too hot. When the oil is too hot, the outside cooks much quicker before the inside has a chance to catch up. I’d recommend using a thermometer to monitor your oil temperature to avoid this problem!

If you monitored your oil and kept it at the ideal frying temperature, then your doughnuts are raw in the middle simply because you made them too big/too thick! 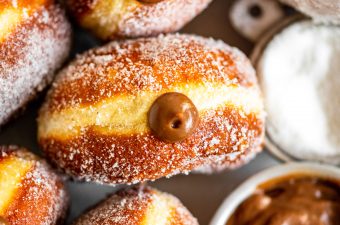 For the Chocolate Pudding Filling:

For the Chocolate Pudding Doughnuts:

To Make the Chocolate Pudding Filling: 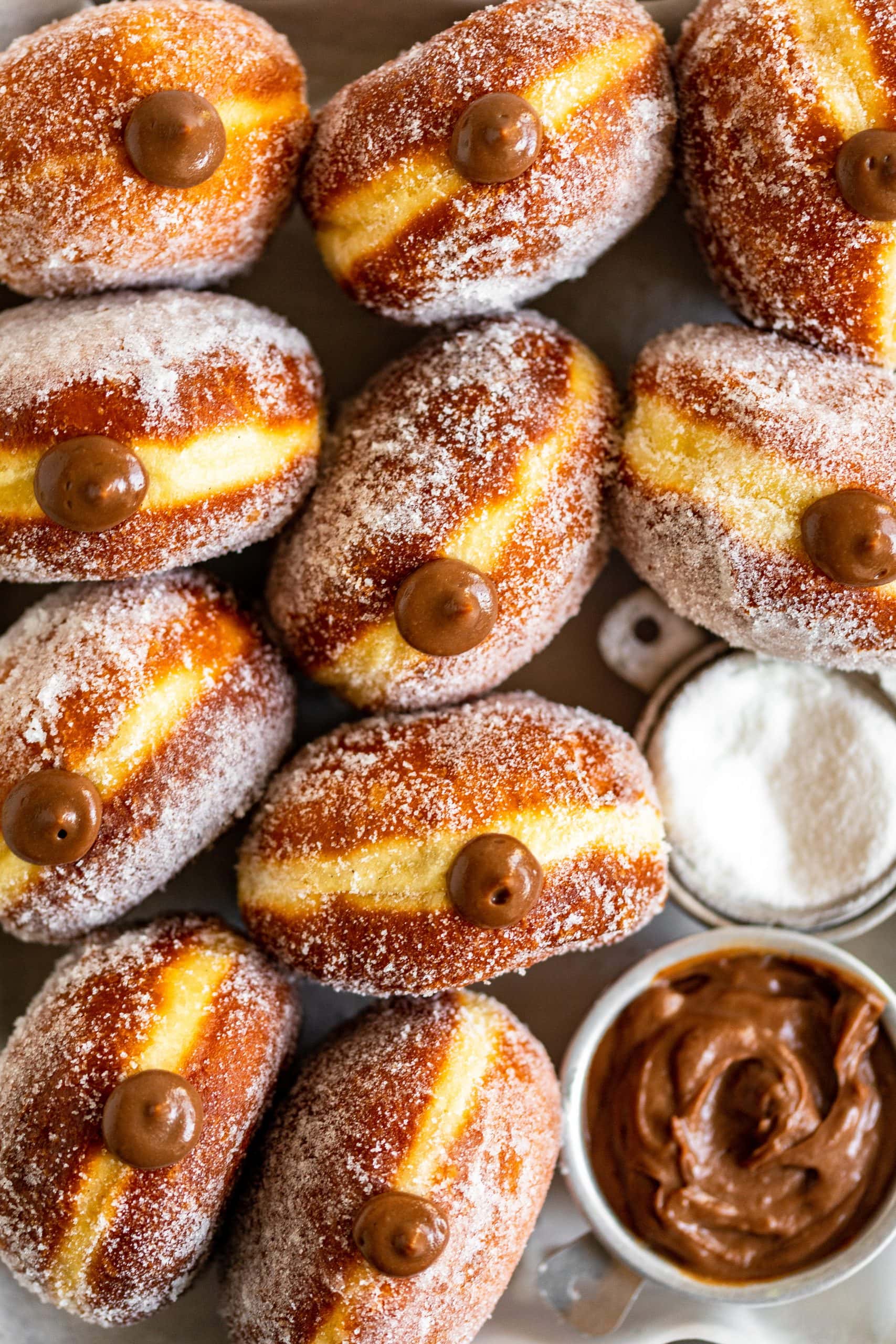