This post is sponsored by Fleischmann’s®Yeast. All opinions are 100% my own. Thanks for continuing to support the brands that help make ‘Mike Bakes NYC’ possible!

I know there are already a million cinnamon roll recipes available on the internet and you might be wondering what sets these apart. Two words: brown butter.

These brown butter cinnamon rolls are soft and fluffy, with a sweet cinnamon sugar filling (heavy on the cinnamon) and a cream cheese icing that drips into the rolls. There's brown butter incorporated into the dough, the filling, and the icing and I just KNOW you're going to fall in love with these after one bite.

I used Fleischmann’s® RapidRise® Instant Yeast for the brioche dough, which I actually use in most of my yeasted baked goods. It's reliable and it makes the rising time faster without sacrificing any quality; I'm talking a soft and supple dough every single time. It doesn't get much better than that! If the idea of working with yeast is a little scary to you, I highly recommend checking out Fleischmann’s® Yeast's Baking Basics for a ton of helpful tips!

To help ensure your success in making these Brown Butter Cinnamon Rolls, we are going to walk through the significant steps in the process together! Starting with browning the butter.

One of the only downsides to these brown butter cinnamon rolls is that they take some minor planning ahead to make. This is because to get the flavor of the brown butter into the rolls, you need the butter to have the consistency of softened butter. This means you'll have to brown all of the butter, pour it into a bowl & freeze it to solidify it, then bring it back to room temperature until it's soft and spreadable for using in the dough, filling, and icing. I recommend browning your butter ahead of time and simply storing the brown butter in a container in the fridge for you to bring to room temperature when you need it!

What is Brown Butter?

When butter melts, the butterfat and the milk solids separate. Because the milk solids are heavier than the fat, they sink down to the bottom of the pan and after some time they begin to brown. As the butter browns, it takes on a whole new flavor profile; it becomes nutty and rich and takes on a golden brown hue. You'll begin to smell it very distinctly once the butter is beginning to brown. In fact, I rely heavily on the smell of the butter to know when it is done.

How to Make Brown Butter

Browning butter is an easy process that only takes a couple of minutes to complete. All you need is your unsalted butter, a saucepan, and a utensil to stir the butter as it browns (I like to use a silicone spatula).

This is my go-to brioche dough for just about everything. I mean… the dough is full of little vanilla bean specks and is also incredibly soft and easy to work with. Basically… it's perfect.

To make it, you'll start by adding the flour, salt, sugar, and Fleischmann’s® RapidRise® Instant Yeast to a mixing bowl. Add the milk, eggs, vanilla bean seeds (or paste), and brown butter, and stir until just combined. Then you'll knead the dough until a firm, but slightly tacky ball is formed. (Check out Fleischmann’s® Yeast's website for kneading techniques!) You should really only need 4-4¼ cups of flour, so resist the temptation of adding too much! Once the dough is kneaded and smooth, place it in a lightly greased bowl to rest for about 15 minutes before rolling out and spreading the filling on.

THERE ARE TWO WAYS TO MAKE THE BROWN BUTTER CINNAMON SUGAR FILLING:

The second method is easier, however, I prefer the first method because I find the filling doesn't leak out of the cinnamon rolls to the bottom of the pan as much.

Honestly, this icing should come with a warning that's how good it is. While the brown butter cinnamon rolls are baking, make your icing. Simply add your softened brown butter to your softened cream cheese and stir to combine. Don't worry if the mixture looks a little curdled, it will smooth out! Add the powdered sugar, vanilla bean paste, and milk and stir until smooth and combined. Then, you're ready to drown your rolls once they're out of the oven!

Can I use active dry yeast instead?
Technically, yes! But you'll need to add the yeast to the warmed milk and let sit for 5 minutes before proceeding with the recipe. Also, your rolls will require two longer rises instead of just one; one rise will need to be done after kneading the dough and one after slicing the dough log into rolls!

Can I make the cinnamon rolls ahead of time?
Absolutely. There are two different routes you could take!

2) FREEZE CINNAMON ROLLS TO BAKE AT A LATER DATE
Prepare the cinnamon rolls all the way through their rise. Instead of baking the cinnamon rolls for the entire time, just bake them partway (par-baking) for 10 to 15 minutes. The rolls should be raised and set, but not totally browned. Remove from the oven and let the rolls cool completely in the pan. Wrap the pan in two layers of plastic wrap or place them into a large plastic bag and seal. Freeze for 8 hours or up to 6 weeks. The night before you want to serve the rolls, take them out of the freezer and place them, still wrapped, in the refrigerator to thaw overnight. Unwrap the cinnamon rolls the next morning and bake them at 350°F until they are completely done and a light golden brown all over, about 10 to 15 minutes.

Help! My dough isn't rising! What's wrong?
Yeast has a "use by" date. As it moves beyond that time, it loses its oomph. Check the date printed on the package to make sure it's within its usable life.

If your yeast hasn't expired, then you likely accidentally killed it by adding liquids that were too hot. The ideal temperature of the milk is between 120°F (48°C) and 130°F (54°C); I recommend getting an instant-read thermometer to ensure you don't waste your ingredients!

Help! My dough is extremely sticky and difficult to knead! What did I do wrong?
Dough that is too sticky is a very common problem but it is actually really easy to fix! Sticky dough is almost always caused by a dough that is too hydrated. This basically means that you have either added too much milk to your dough or not enough flour. The fix is simply incorporating a little bit more flour (I recommend 1 tablespoon at a time)! The dough should be slightly tacky, but if you touch it with a clean, dry finger, the dough shouldn't come off onto your finger.

For the Brown Butter:

To Make the Brown Butter:

To Make the Brioche Dough:

To Make the Brown Butter Cinnamon Sugar Filling and Assemble: 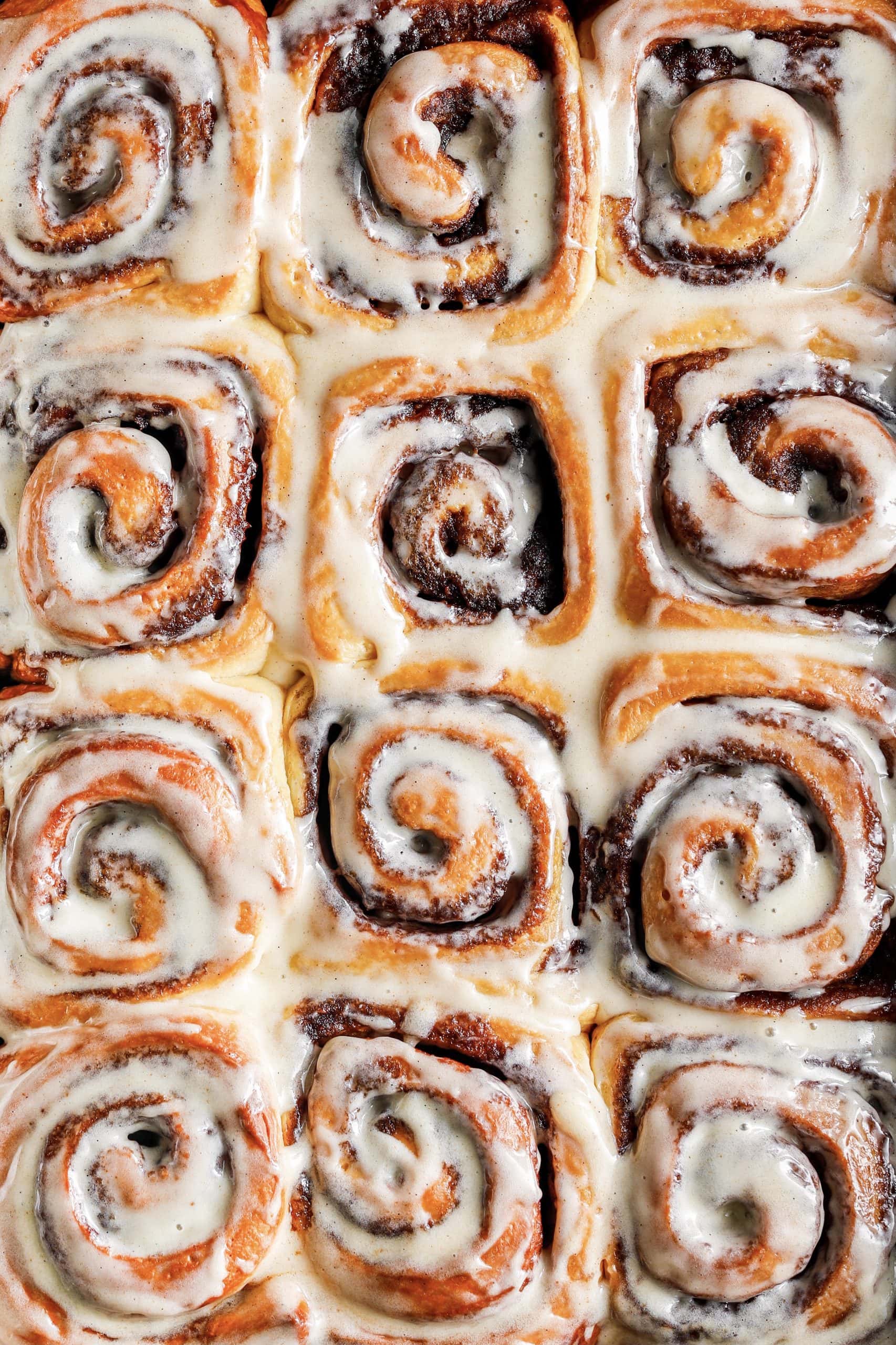