Today, we’re taking fall and putting it on a fork. Sweet and perfectly spiced apple cider cake with a spiced salted caramel Swiss meringue buttercream is what’s happening and it is so good. 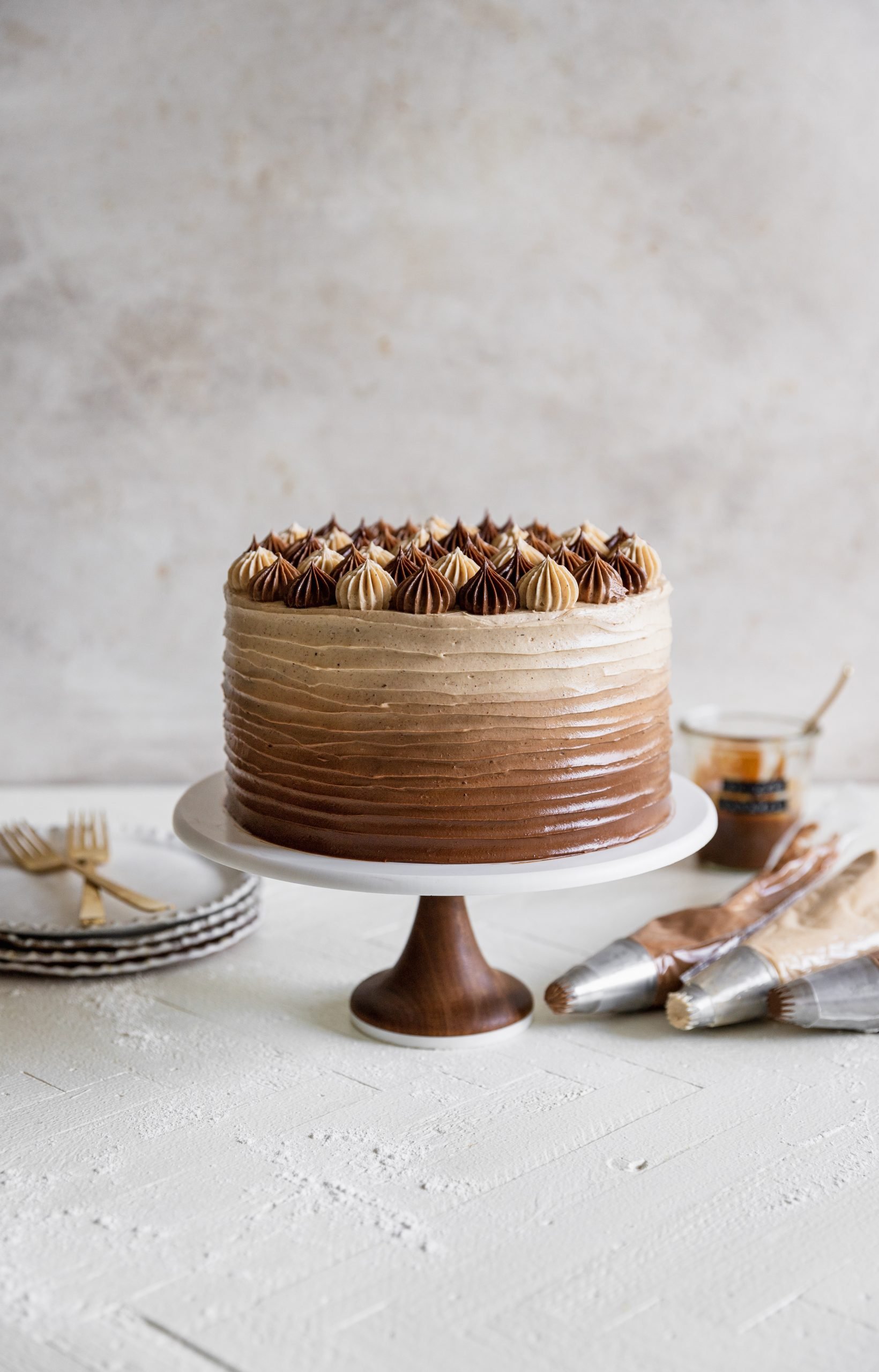 If there was ever a recipe that screams fall, it’s this apple cider layer cake. Made with spiced apple cider and frosted with a silky smooth spiced salted caramel Swiss meringue buttercream (try saying that five times fast), there’s really nothing not to love about this autumn spiced cake. This recipe is a fun little collab I did with my friend Erin from Cloudy Kitchen and hopefully won’t be the last! 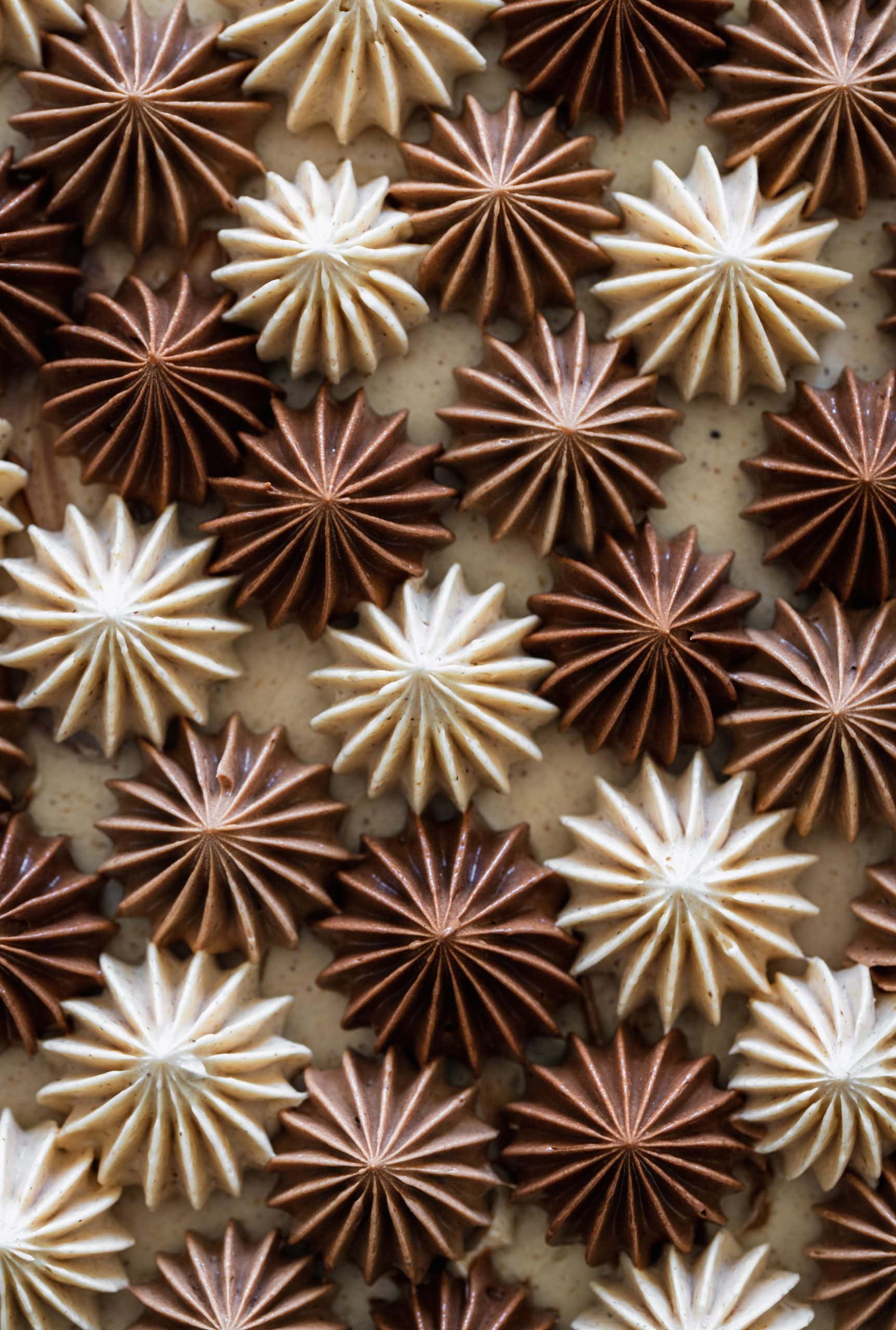 Instead of starting with creaming butter and sugar together like traditional cake recipes, this cake uses the reverse creaming method which begins with the dry ingredients and ends with the wet. This method produces a lighter and tighter crumb with more spring. The slices are tight like pound cake, but not dense in the slightest. It’s velvety soft and almost tastes a bit creamy!

First, add the dry ingredients, including the sugar, into the bowl of a stand mixer. Next, gradually mix in cubed, room temperature butter until the mixture resembles sand. (In this step, the butter coats the flour which minimizes the flour’s formation of gluten, and helps result in a finer cake crumb. You’ll taste the difference, trust me!) After that, we’ll add the rest of the liquids and mix until just incorporated and then your batter is ready. It’s that easy! 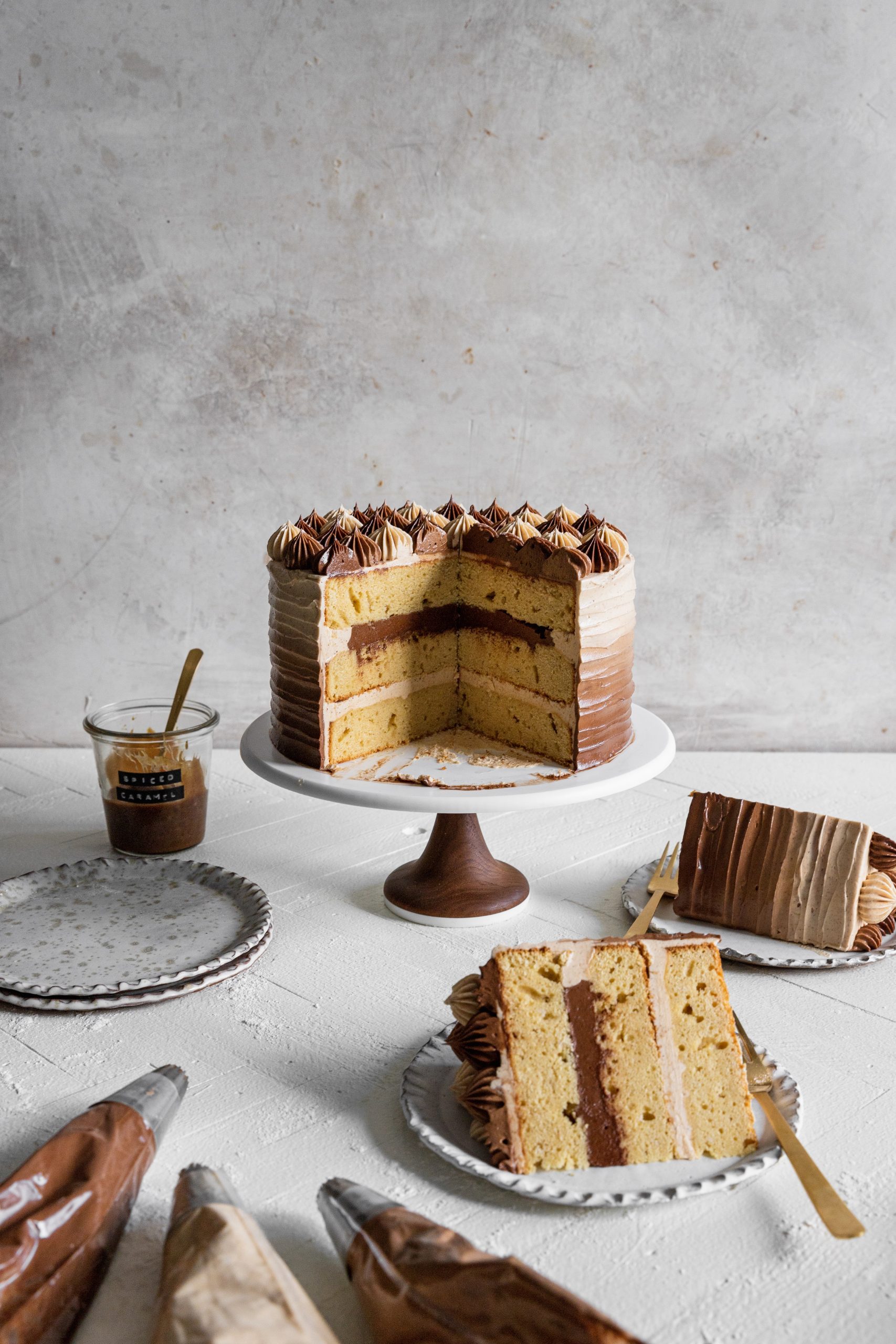 Making caramel seems a little scary, but the whole process actually takes less than 15 minutes. To make a spiced salted caramel sauce, you’ll first add your heavy cream and spices (cinnamon, ginger, cardamom, cloves, and nutmeg) to a glass measuring cup, and microwave it for about 30 seconds. Next, add the sugar into a heavy bottomed sauce pan; no water or anything is needed, just the sugar! Heat the sugar for a good five minutes, stirring a few times to scrape the bottom of the pan and ensure no sugar is burning. The sugar should melt rather quickly and will start to brown. Once it’s completely melted and a lovely golden/amber hue, remove it from the heat and add the butter, stirring until melted.

When you add in the butter, the sugar will start to bubble like crazy, which is totally normal! This is what you want to happen, actually. Stir everything together until combined, then carefully pour in the spice-infused heavy cream and return the pan to the stove for a few seconds while stirring. Stir in the salt and ta-da, you’re done! Set the caramel sauce aside to cool or else you’ll seriously scald your tongue. 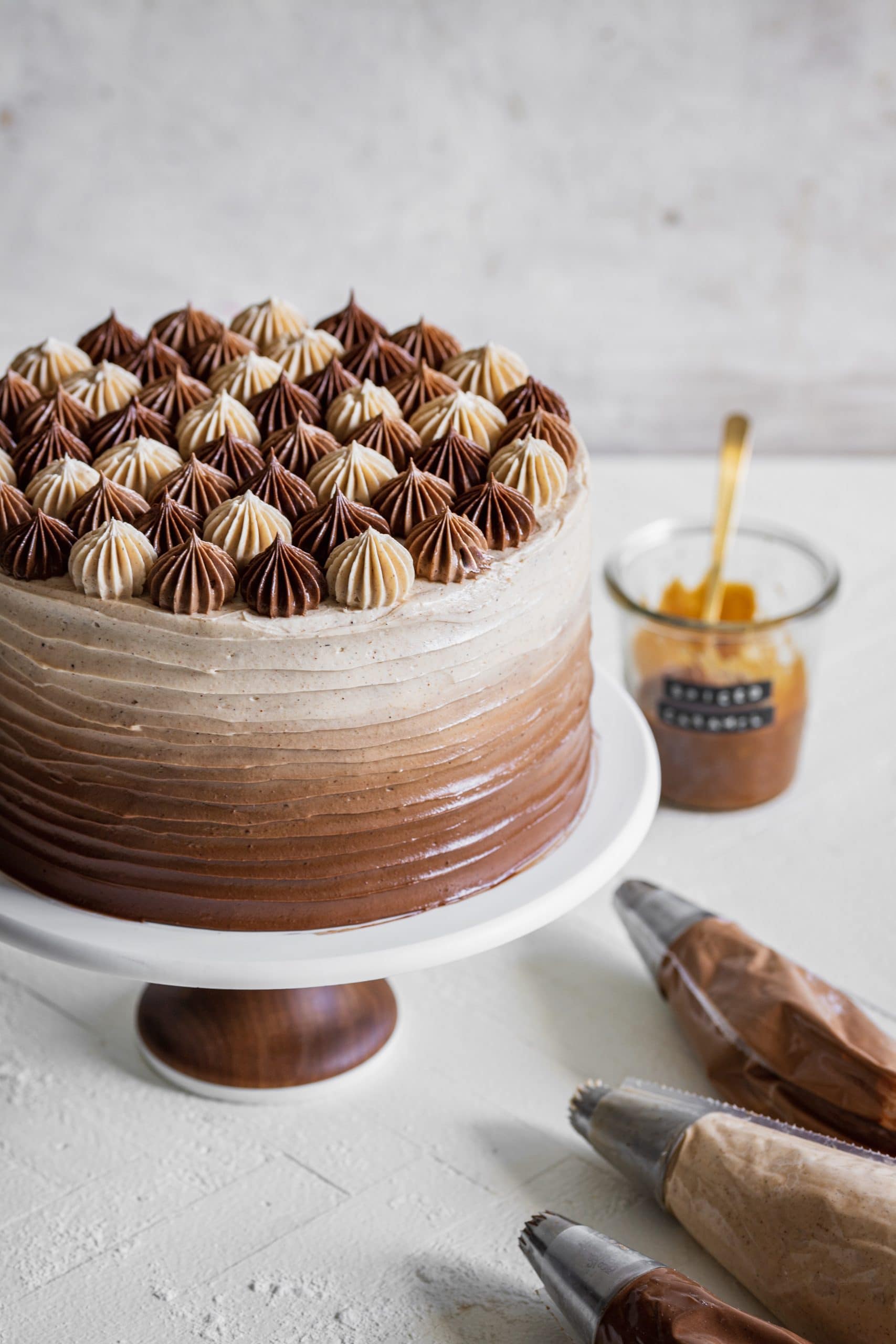 A Quick Note on Decorating the Layer Cake: 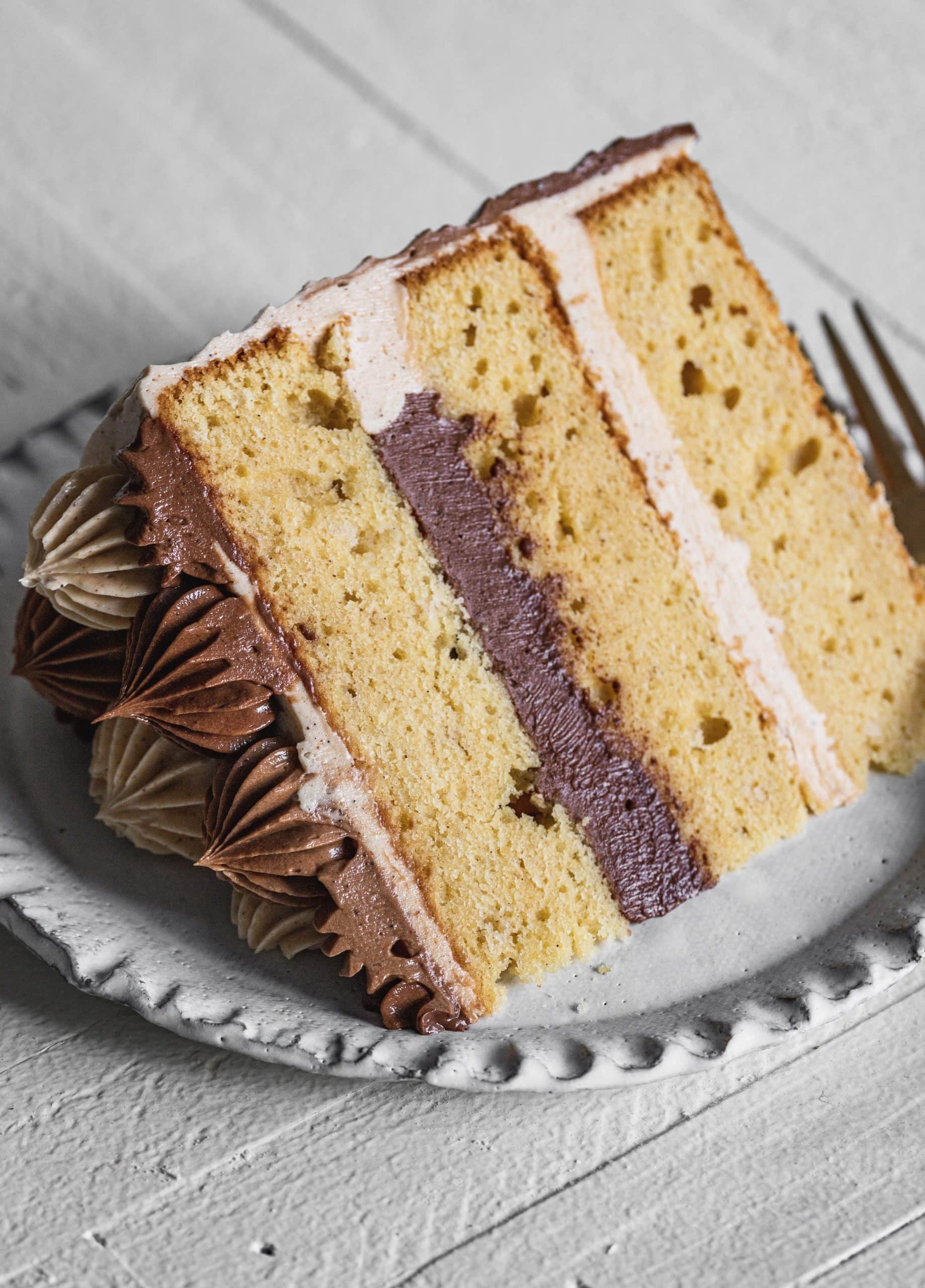 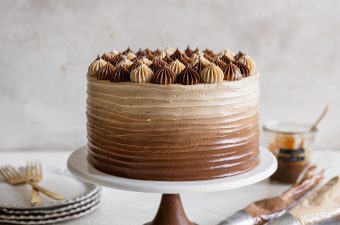 A perfectly moist and tender fall cake flavored with apple cider and cinnamon gets frosted with the most addictively creamy spiced salted caramel Swiss meringue buttercream. Fall baking has never tasted so good!

For the Apple Cider Cake:

Open
whether you’re rationing your ingredients (me),

Open
has anybody actually gotten salmonella from eating

Open
i’m not here to tell you to wash your hands, sta

Open
the salted caramel situation happening inside of t

Open
IN CASE YOU MISSED IT: i announced in my stories y

Open
i think we all need more low maintenance galettes